(Please note, there a various hyperlinks below that'll direct you to websites, articles and pages with further information on the discussed.)

Many of you know by now that I'm a proudly pro-choice, intersectional feminist who utilises my online platforms to discuss important matters at hand; particularly Ireland's current abortion rights campaign. I've discussed our inhumane 8th amendment in detail previously but to summarise: it's currently illegal for any woman* (trans men and non-binary people included) in Ireland to undergo the basic healthcare right that is abortion. This amendment, voted for in 1983, equals the life of the mother to that of "the unborn".

10-12 financially-able women* travel to the UK every single day to undergo safe abortion services there because they're unable to at home. They travel across seas feeling the weight of their shameful country on their shoulders and fly back home, to a land that sees them as merely incubators - without a choice and without a guarantee of future medical support.

February of this year finally brought confirmation that a vote will mostly likely take place on May 25th to repeal the eighth amendment and finally give women the right to choose what they do with their own bodies. Alike to 2015's equal marriage vote, the months leading up to this opportunity will be crucial in informing the middle-ground voters and anti-choicer campaigners.

Ireland still reeks of hey-day Catholicism and its chains and to break free of them, we must let Ireland enter the 21st century, once and for all. Our resounding 'Yes!' vote to equal marriage was one step forward and allowing women to undergo safe, legal and free abortion services, on our own soil, is another step onwards.

I receive questions daily from readers, followers and fellow-bloggers, asking how to become more involved in the Repeal the 8th campaign - needless to say, these questions have doubled since January's vote announcement. I thought it was best to put a blog post together, hopefully steering you in the right direction and encouraging you to become more involved in this life-changing campaign.

We're currently living in a 'fourth wave' of feminism that primarily focuses on intersectionality and the use of technology. Online activism has become an inherent part of campaigning for the equal rights of women, globally, and the Repeal the 8th campaign is no different.

One of the biggest ways in which you can get involved in Repeal the 8th campaigning, is online. There's countless websites, articles, blogs and social media accounts dedicated to the cause and if you've access to a computer, you've access to it all.

Following abortion rights Twitter accounts and campaigners, will involve you in the conversation daily. Ask questions, include yourself and add the #repealthe8th hashtag to your profile to let others know you support the cause and want to engage with it.

If you find you don't have the words to discuss your thoughts yourself (don't fret - it's a big topic), retweet others who do on to your page!

The same applies for Instagram, where thousands of Repeal-related posts are uploaded each month. Between Repeal jumper-wearers, infographics, personal anecdotes and artwork, it's all there for you to engage with. Alike to Twitter, let it be known you support the cause by adding 'Repeal the 8th' to your bio and post a snap or two discussing your involvement and why it's important to you.

Something as small as adding a 'Repeal' badge to your Facebook profiler or sharing a post from your favourite campaigner, can get a conversation going; a conversation that may lead to someone changing their minds on their original anti-choice stance or someone who simply needed that bit more information to solidify their opinion.

Online activism is key for 2018's vote because it'll be the youth vote that makes a difference to the outcome (as our generation has never had the opportunity to vote on abortion rights), alike to the 2015's marriage referendum. Online activism is just as essential as offline activism in a technology-driven world and it's wise to use our internet platforms and voice to spread the message.

(Sick of the silence coming from your favourite Insta-babes? Me too. Read my open letter to Irish Influencers and bloggers here, regarding their silence around movement).

Despite how crucial online activism is however, offline activism plays a necessary role too. I've been attending abortion rights marches with my Nana since 2012, when Savita Halappanavar died tragically from a septic miscarriage. Marching on the streets each year to demonstrate your activism, grabs the attention of not only national and international media but also fellow potential-voters.

Attending discussions and fundraisers, canvassing door-to-door or simply chatting to someone about the vote, can make a world of difference. I'm lucky that I have an extremely open-minded family so I personally haven't had to experience an anti-choice relative. However, I have friends who have had these conversations and they all reported back to me that patience was key.

We have to remember that a lot of the older generation grew up in a brainwashed church-controlled society and mightn't know the legitimate facts surrounding abortion, due to the propaganda they've been fed since childhood. (This doesn't apply to all of the older generation mind you but from chats I've had with friends, it seems to be the case for many). Be patient, understanding and highlight why the repealing of the eighth amendment is so important to you and for others. 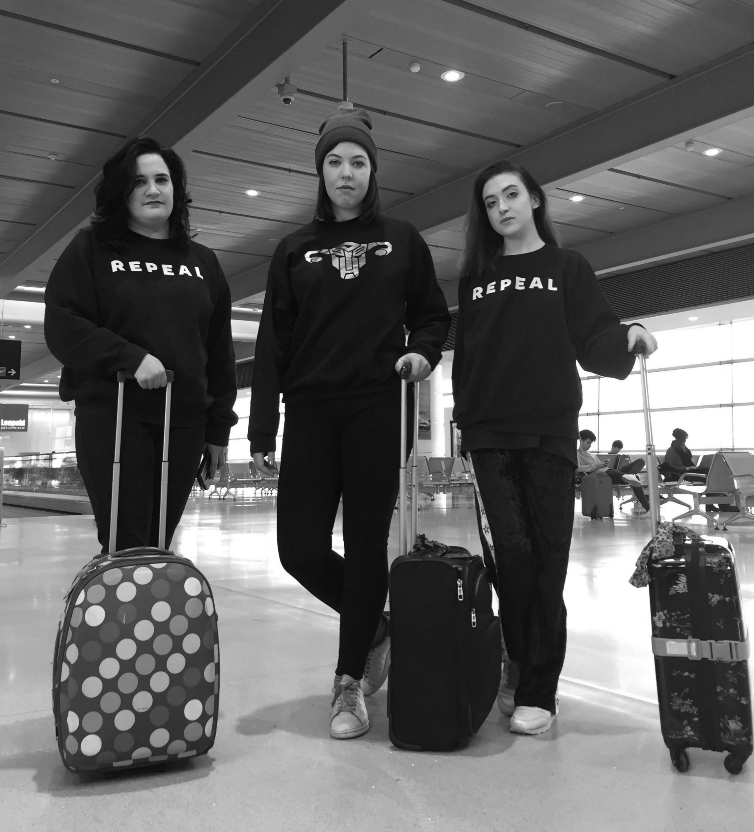 There are tonnes of regional abortion rights groups set up all over the country; whether you're in Dublin city or in rural Ireland, there's one bound to be near you! Local groups are a fantastic way to get involved in the campaign and meet other activists. Regional groups hold regular meetings and campaign locally - whether it's door to door or in town centres. They're a key component in making sure everyone's informed and up to date, especially in the less-populated areas.

Rural groups generally tend to organise transportation to big marches and events held in cities around the country too, which can often be too difficult to attend for those without transportation options or simply the funds to get there.

If you're a student in Ireland, there's more than likely a feminist-focused society or dedicated Repeal the 8th group in your university or college.

Alike to the regional groups, these are a fantastic way to meet like-minded students and feel part of a collective. They're also a huge player in protests and marches, often creating their own banners to make their voices - as a student body - heard.

I joined the NCAD Strike4Repeal group this time, last year, before March 8th when people nationwide went on strike to demand a vote. Attending meetings and activism events made me feel part of a group and the team spirit really encouraged us to keep going, chat to our peers and rally up the troops before we marched! It was a fantastic experience to be included in before I graduated. 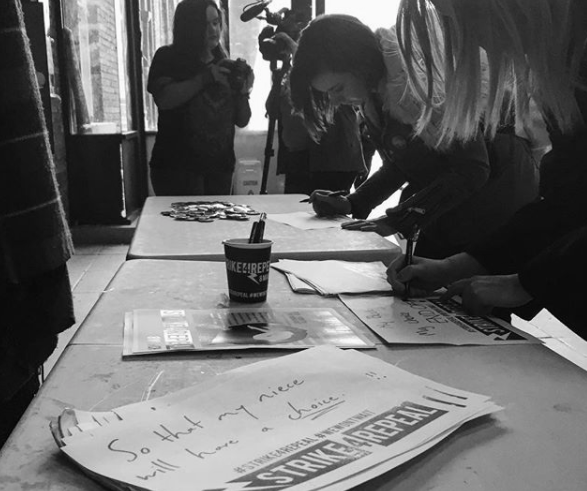 If you're an expat living abroad or simply just want to support Irish women's fight for abortion rights, there's a heap of things you can do online to raise awareness that are listed above. Irish women's fight is all women's fight - when women are oppressed, no matter where, it affects all of us and our end-goal of gaining equal rights to men.

There's various Repeal the 8th organisations set up globally for expats and supporters alike to join so there's no need to feel excluded from the conversation or general activism if you're not living at home. London ARC's 'Home To Vote' initiative has just launched, encouraging UK-based Irish people to travel home to vote in this life-changing referendum. It was a huge success for marriage equality in 2015 so no doubt it'll be enormous again this year. 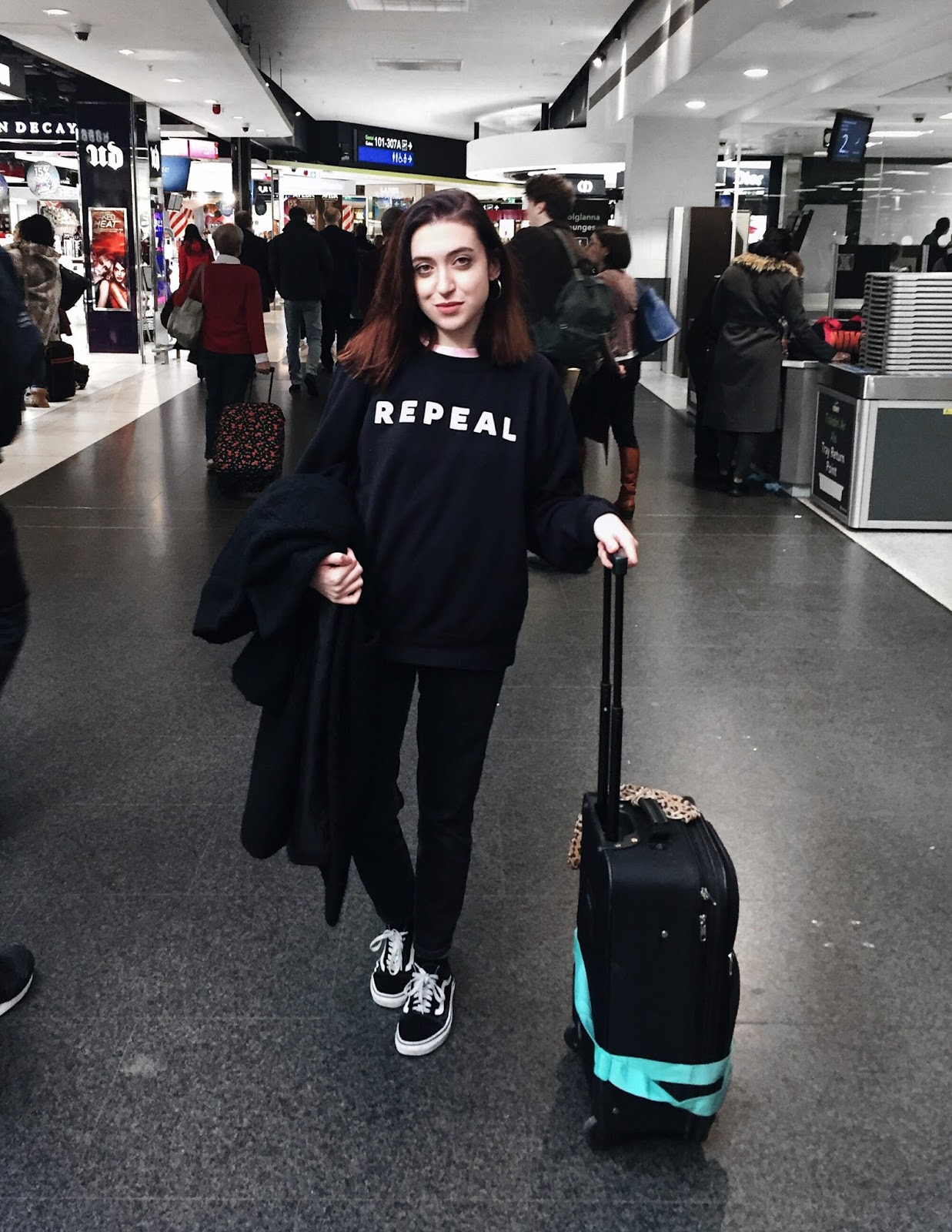 The Repeal the 8th merchandise that's sprung up over the last few years is nothing short of amazing. Anna Cosgrave's 'Repeal' jumpers will no doubt go down in history, having been worn by activists, iconic feminists and politicians.

Wearing clothing, badges, patches and anything shouting your pro-choice stance will garner attention and oftentimes strike up conversation. I beam with pride and power when I wear my Repeal jumper, feeling encouraged every time a passerby gives me a nod in solidarity.

If you attract the "wrong" sort of attention (i.e disapproving looks or comments), hold your head high and simply say "I believe in choice" - or ignore them. That works too.

VOTING: I urge you all to double-check that you're registered to vote before May swings around. So, so, so many people are removed mistakingly from the register due to college moves etc and it's essential you guarantee you'll have a vote NOW. Log on to checktheregister.ie and see within 2 minutes if you're registered. If not, follow the instructions given.

VOTING ABROAD: "Under Section 11 (3) of the Electoral Act 1992, Irish citizens overseas may retain full voting rights for a period of 18 months, should they intend to return to Ireland within that timeframe."

If you're unsure about whether or not you're eligible to vote in the upcoming referendum, click here.

DONATING: The Abortion Rights Campaign is run in its entirety by volunteers and 100% of funding goes directly to the cause. Needless to say, they're always open to donations to help get the message out there - online and off. Donate here.

CONTACTING YOUR TD: Repeal Eight have a pre-written email that you can send to your local TD here. Asking for the pro-choice backing of your local TD's and showing your personal support for the campaign is essential; it informs them that the very people voting for them, are focusing on this issue and are willing to reach out and question them about it.

PROJECTS & GROUPS OF NOTE: My own personal project Repeal Chain was a final year collaboration, that aimed to highlight Irish women's abortion struggle at home - and abroad, via social media. Others include: Everyday Stories, Not At Home, Artists Campaign to Repeal the Eighth Amendment, Una Mullally's Repeal the 8th Anthology, Strike 4 Repeal.

MARCHES: The next big march (and hopefully our last) Votes for Repeal, is on International Women's Day, March 8th. Beginning at the Garden of Remembrance in Dublin at 5:30pm and ending at the Dáil. All info here.

I hope this post has led you in the right direction and spurred you on to campaign and involve yourself in the historic fight for bodily autonomy. If there's a will, there's a way: whether you want to campaign online or off, there's an avenue and direction for you to go down.

This is a once in a lifetime opportunity and can only be won by patient discussion, informed education and empathy for women.

Remember: despite whether or not you'd undergo an abortion personally, that does not give YOU the right to make that decision for others. The key word here is CHOICE. Please vote for it.

The countdown to abortion rights begins...