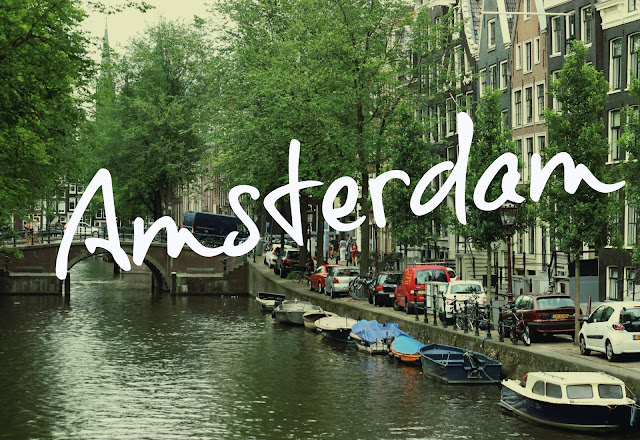 This month, I embarked on what one would call a "life-changing experience". I went interrailing around Europe with Helen Anderson (I'm sure many of you know her from good ole Youtube). Interrail* is a popular travelling system amongst European students and 20-somethings, where you pay for an affordable and flexible opportunity to travel across Europe and visit as many countries as you wish (depending on your chosen plan). The majority of people interrail via train and it's a particularly popular venture for Irish and UK students. We both jumped at the chance to go, as it's something neither of us have ever done and have always wanted to do.

Helen and I chose the 15 day Interail Global Pass and we eventually decided on 5 cities to travel to; 2 and a half days in each place, which would allow us decent time to explore and see the cities and what they have to offer. We selected Amsterdam, Berlin, Prague, Gmunden and Paris. 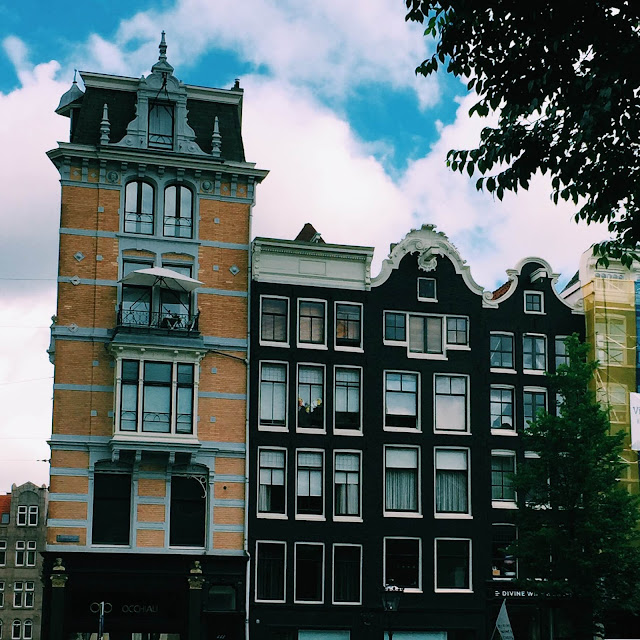 For accommodation, we decided to stay in Airbnb locations as opposed to hostels, as they
would work out at around the same cost, they're a safer alternative and we were both curious to try out this fairly-new way of staying abroad. Airbnb* is a new service to many and is growing in popularity by the year.

To give you guys an idea of what it is and how it works, I thought I'd give you a little run through: Airbnb is a service where people rent out their private accommodation to you for X amount of days in your chosen location. The accommodation can range from apartments, to houses, to villas! Everything and anything - the variety makes it all so much more interesting. They’re usually very affordable and come with more amenities than your average hotel or youth hostel. When choosing a place to stay, you simply browse the Airbnb website or app, select what country you're going to, what your price range is, how many beds you need etc etc and all is laid out in front of you.

Once you’ve selected and paid for your Airbnb, the host of the property will confirm your stay and get in touch with you. The hosts are always friendly and will provide you with all of the necessary info you require and any additional tips you need to get around the area. You then plan to arrive at your Airbnb at a decided time and your host will be there to show you around and give you the keys. 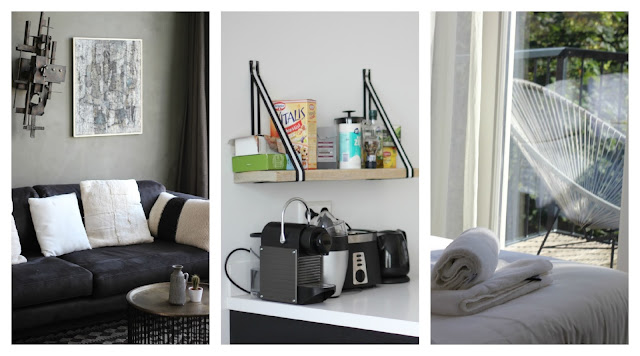 We began our interrailing journey in Amsterdam. I flew into the airport during the afternoon and met Amy Valentine our blogger friend who was joining us for the 3 days. We met Helen that evening in our gorgeous Airbnb which was situated really close to the centre. The interiors as you can see, were super-chic! The table was laden with Amsterdam maps and guides.. and Stroopwaffels! My new weakness. There was food in the cupboards, a snazzy bathroom and even a balcony. 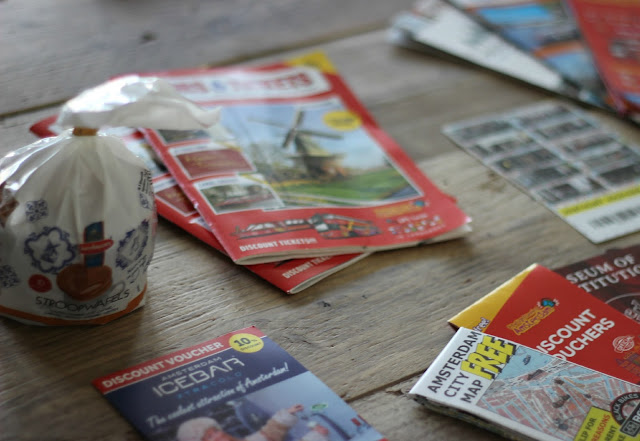 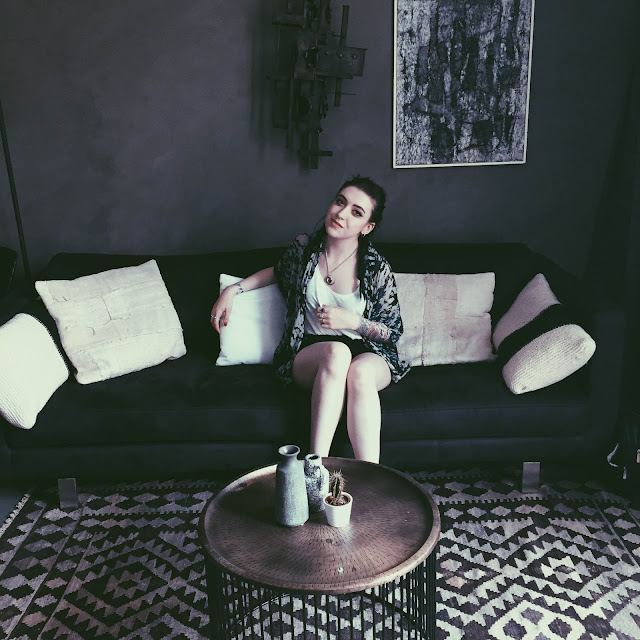 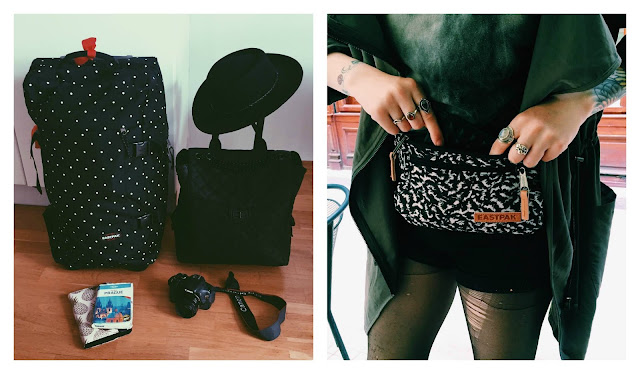 I'll talk more in-depth about what I brought and what I advise you to bring interrailing in a later post but we both used Eastpak luggage throughout our adventure. I brought along a gorgeous Eastpak 'Lill Dot' Tranverz (medium) suitcase*, as it was the perfect size for 3 weeks+ worth of outfits and it also had incredible leeway for any souvenirs I picked up. I also used an Eastpak 'Curls' Talky bumbag as pickpockets are present in all cities, let's face it, so I carried around important items like my passport, money and phone in it wherever we went. It was flat-enough to fit under my clothes and the design was pretty funky so it looked great with what I was wearing. 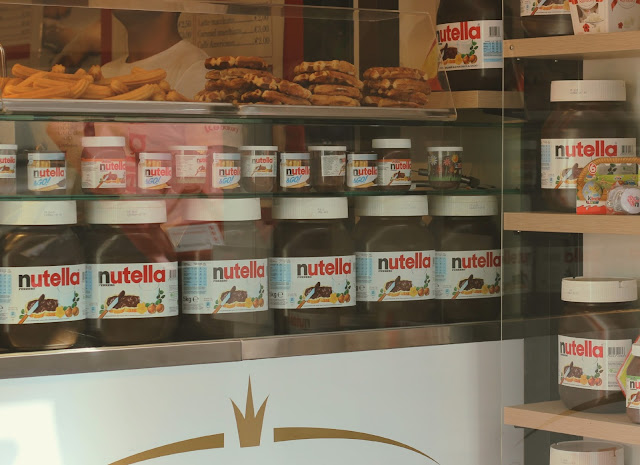 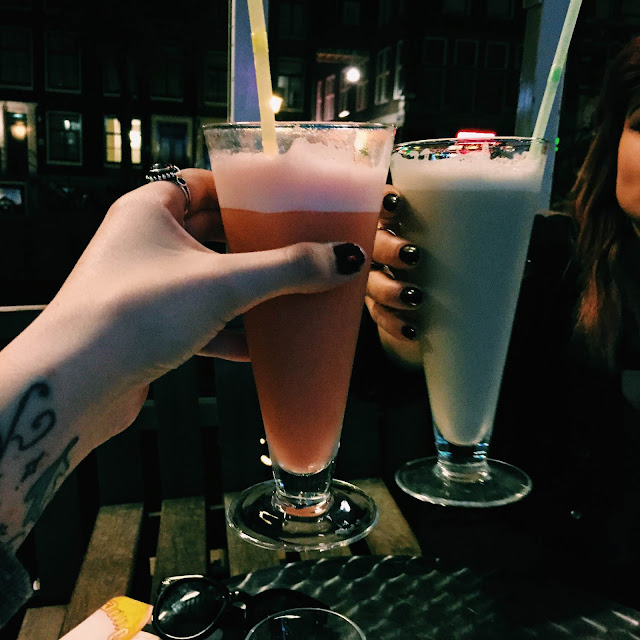 The food was gorgeous in Amsterdam, alike to a lot of major cities, there was a huge array of different continental food choices. My personal favourite meal was in Ramen-Ya, which Amy had suggested we go to on our last night. It was such an unusual setting and not too pricey - perfect if you're looking for something unique, filling, yet modern.

You MUST try the waffles if you go to Amsterdam, they’re available in little waffle shops dotted along the streets or just on the side of the roads themselves. They’re absolutely heavenly drowned in Nutella! Stroopwaffels are a must-have too; I know they’re available in supermarkets in Ireland but there's nothing like eating treats in their homeland. They’re crispy but soft on the inside and the perfect balance of sweet and salty. Tip: balance one over a hot mug of coffee or tea for a minute or so - you'll thank me later! 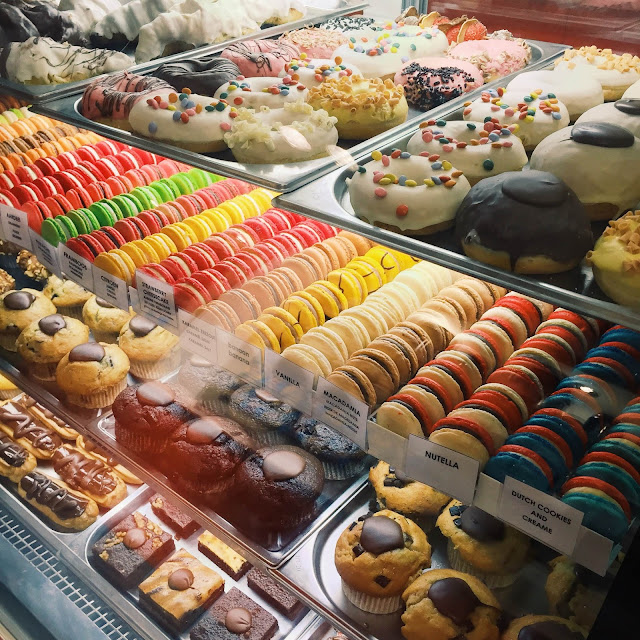 One of the key things whilst interrailing is keeping a close eye on your money. Eating out a lot can run your bank account dry so we made sure to make note of where the nearest supermarkets were. Airbnb allows guests to use kitchen appliances so it was fantastic to get a little shop in and mix and match what meals we ate in and out.

We had a delish picnic on one of the days and bought everything from hour-old bread to freshly-made sushi for just under a tenner each. Buying from supermarkets for at least one meal a day will save you from overspending on grub. The choice was great in Amsterdam supermarkets in particular.

Drinks-wise, the pricing was quite similar to here in Dublin (and London) - on the expensive side but nothing too crazy. We found that a lot of the bars closed at midnight surprisingly, except a few outside of the city centre, so we usually enjoyed a glass of wine with dinner and a cocktail or two before we ventured home for some beauty sleep. 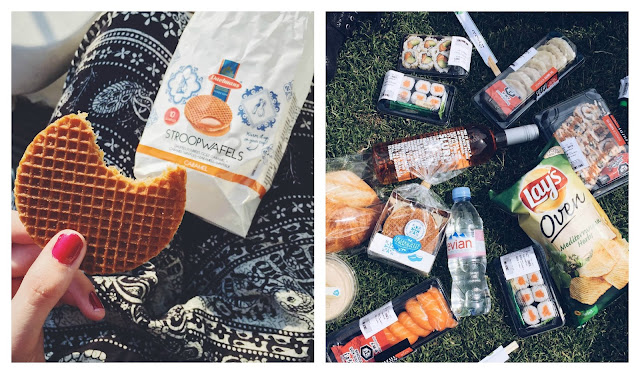 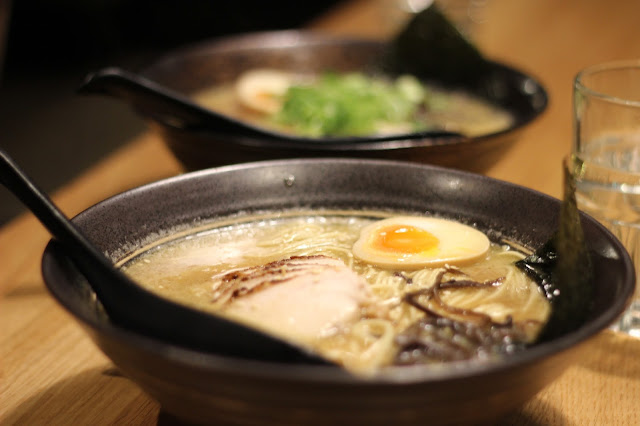 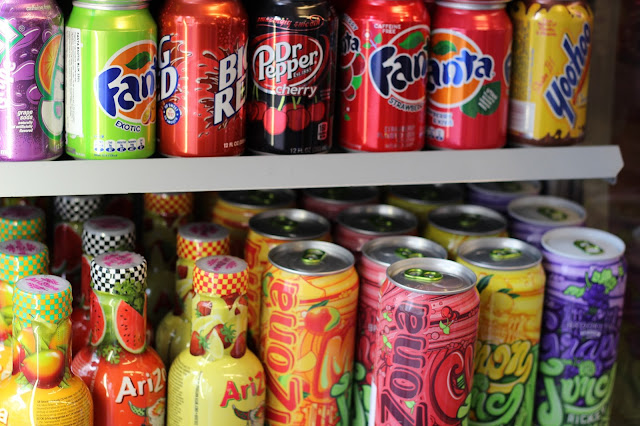 My main priority whilst in Amsterdam was going to the Henri Matisse exhibition in the Stedelijk museum, 'The Oasis of Matisse'. I’m beyond obsessed with Matisse at the moment and I plan on writing about him for one of my second year essays.

I was absolutely dumbfounded, needless to say, when I walked in. You’re met with not only Matisse's work, but the work that inspired him throughout his career from the likes of Picasso and Van Gogh. The exhibition leads you through Matisse’s artistic life, from his very classical beginnings to his last, most contemporary, work and ideas.

I highly recommend heading to the exhibition if you're interested in contemporary art. It's on until August 16th and free to attend if you’re under 18. It's €20 otherwise but totally worth it! 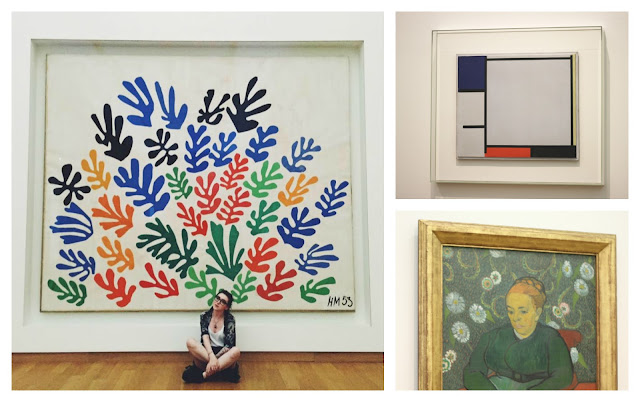 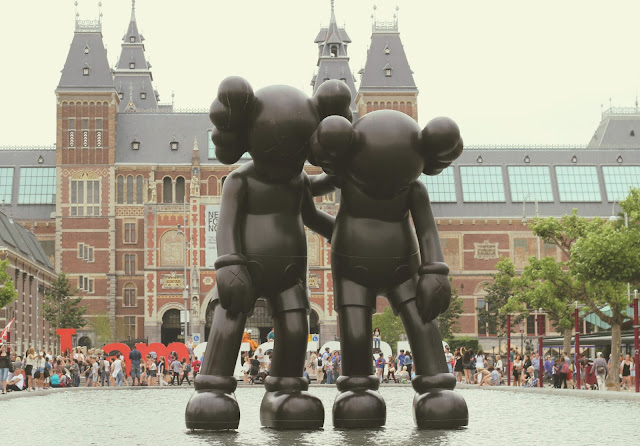 Museum-wise, there’s a lot of, errr, odd ones to say the least in Amsterdam, naturally. We went to the Sex museum one of the nights for the laugh and it was honestly really interesting. I expected it to be cringey and tacky, and in some parts it was, but the overall experience was actually fun. It was crazy to see how the likes of pornographic imagery and what is deemed "attractive" has changed over the centuries - they had hundreds of photos on display, from as early back as the 1800's! It was only around €4 to get in and it’s definitely something I’d suggest doing if you’ve time to spare. 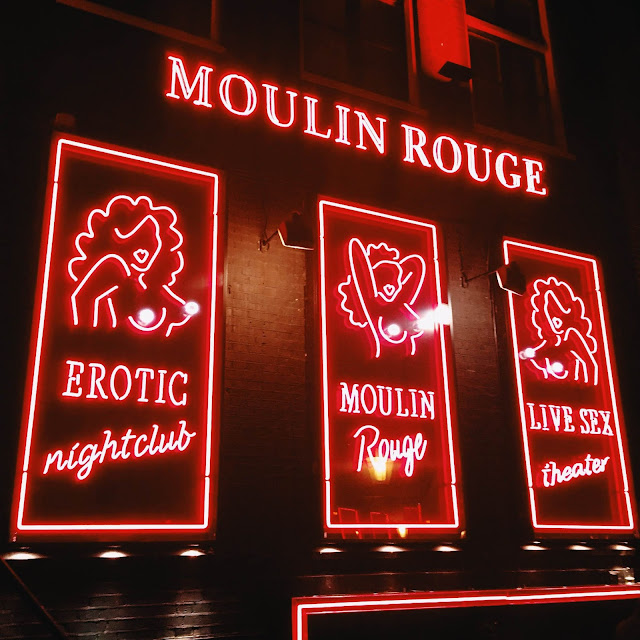 I was hoping to visit the Anne Frank house but it was booked out entirely. I went to book a place back in early May and July was booked out even then. If you plan on going, book well in advance. Nonetheless, we visited the Anne Frank house one evening. Merely standing in front of it and seeing it in the flesh was extremely moving. It’s a brief walk along the canal from the city centre to the house and even if you don’t have a pre-booked ticket, it’s really great just to see it in person. 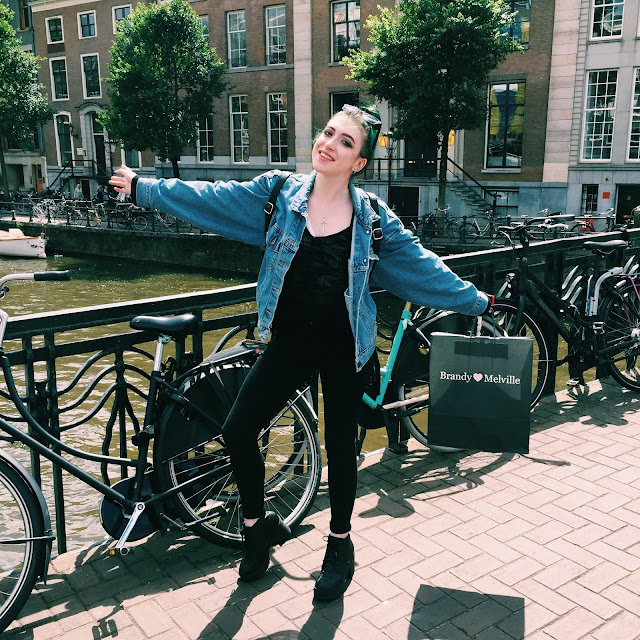 The shops in Amsterdam were incredible! I loved Brandy Melville and Monki for clothes, as we have neither in Ireland. Brandy Melville is the perfect store for laid-back Cali rock-chick vibes and we each bought a load of stuff in there (despite the infamously rude staff, errr).

The tourist shops were gorgeous in the city and had all of the clogs you could imagine! I didn't find any of them madly expensive and as we shopped around, we found the prices in all of them quite similar. I bought clog keyrings and magnets as presents for people, along with some yummy Dutch chocolate. Buying anything too big or heavy will (literally) just weigh you down when you're travelling from place to place so keeping souvenirs small and easy to pack away is a must. 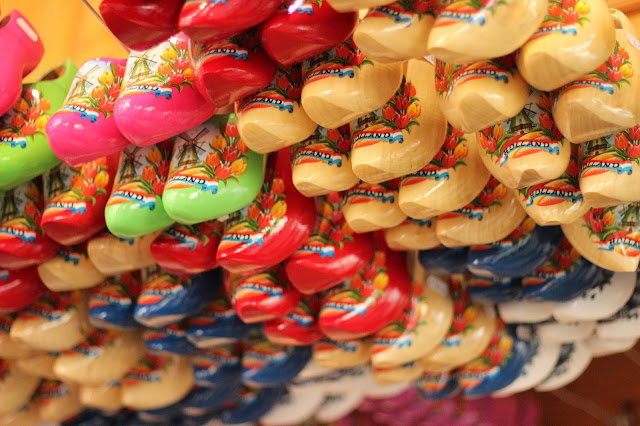 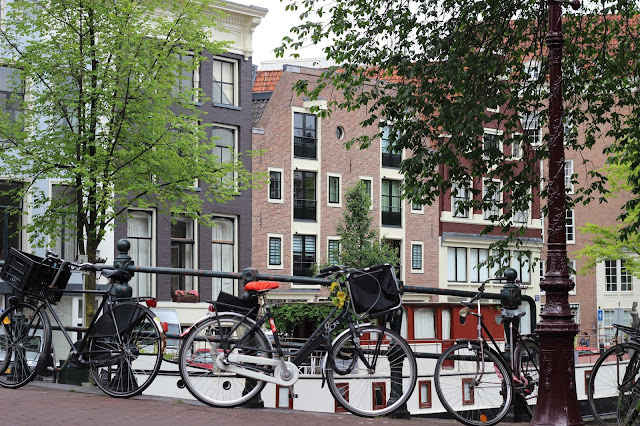 Cyclists are a priority in Amsterdam and I can assure you there are way more, better-built, cyclist paths than pedestrian paths there! We have thousands of cyclists in Dublin but try tripling that, and that’s what you get in Amsterdam. They’re EVERYWHERE. It’s admirable to see so many people out cycling but it’s quite scary getting used to them as a tourist. Most cyclists will politely ring their bell at you if you’re in their way but do expect a few stern looks if you end up in a near-collision!

Tourists can also hire bikes to cycle around the city but as I wasn’t too confident cycling on the roads, especially as driving is the opposite way around to here, we didn’t rent any out this time.

Simply walking is the best option for getting around. Everything is pretty much in walking distance from each other and you get to take in the sites as you go along. Of course, the trams are also really handy and give you a fabulous view of the city around you. They were particularly great when we were heading to and from our stations with our luggage, as they're pretty roomy. Ticket prices are reasonable and you purchase tickets in a booth inside the trams themselves. 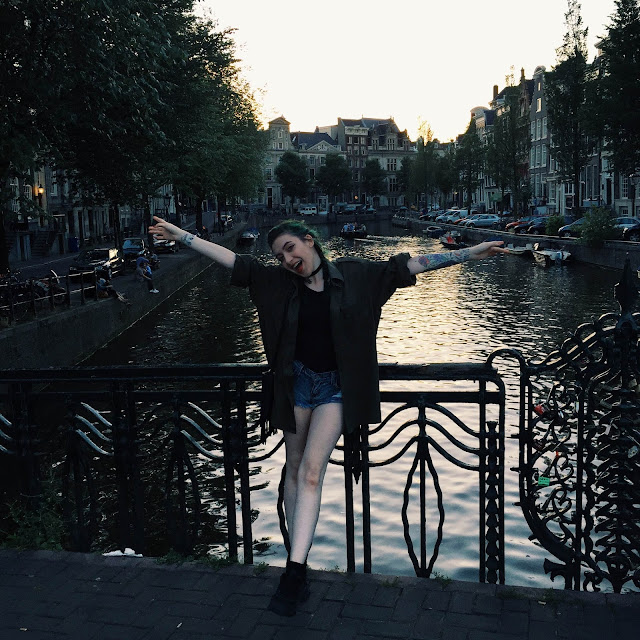 All in all, I really enjoyed Amsterdam and it was exactly how I imagined it. The people were friendly, it was steeped in history, yet inspiringly modern and the food was majorly gorgeous. It's a perfect location to head to during interrailing, as it's a unique city in its own right and so beautiful for Insta-worthy photos and videos. I can't wait to visit again! 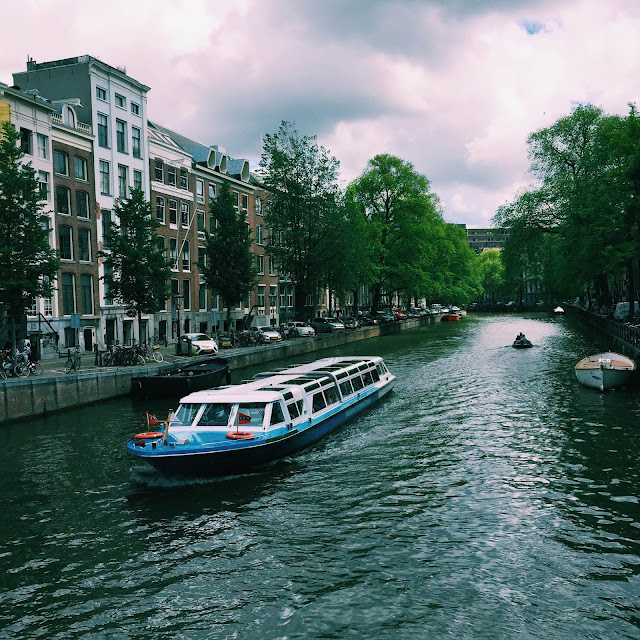 Check out Helen's vlog of our Amsterdam adventure..