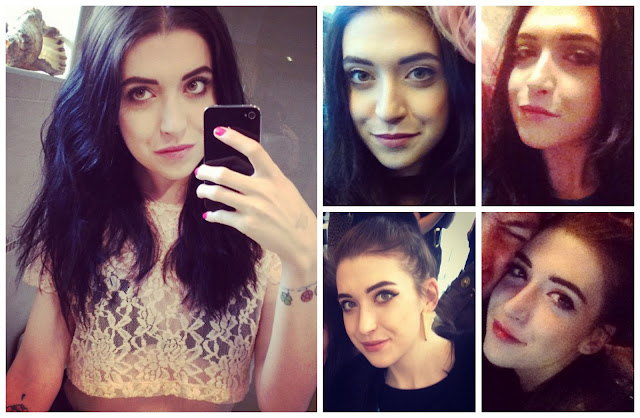 Hi everyone! I can't believe I'm on my first "milestone" post-surgery blog post. It's been just over 2 months since I underwent my double jaw surgery and I couldn't be happier. The first month dragged by, like I mentioned before, but the last 4 weeks have flown in - it's scary! The full results of my surgery are more noticeable now than ever, as you can see in the photos above. I still have my braces, surgical hooks and a few wires in though, so it's not the final result just yet.
The swelling has gone 90% from my face; there's some areas surrounding my jawline, cheeks and nose that are still swollen but aren't noticeable. I'm still quite numb; mainly in my chin. My bottom lip is FINALLY starting to get feeling back in it, slight tingles and twitches running through it - it's a great sign. As long as my lips have feeling in them, I don't mind too much about my chin!
I'm eating 100% back to normal now, there's no restrictions really. As long as the food fits in my mouth and is easy enough to chew, it's fine! I can't fully express how delighted I am to be back on a normal diet; the liquid diet was one of the worst things about the whole experience. I never want another bowl of soup or milkshake again, bleugh. I've drank alcohol twice since the surgery, after approximately 7 weeks and had no side affects (I've had a few people ask me about this). There was no extra pain the next day, my face was only a tiny bit more swollen the next day but not noticeable at all and it went day pretty quickly. Obviously when drinking, don't go overboard and avoid really busy places like clubs and gig etc until your bones are fully healed.

One of the toughest things for me to deal with over the last few weeks, has been stretching my jaws. I was told a few weeks back, that I should be able to fit 3 fingers comfortably in my mouth; I'm currently only able to fit 2 in. I have to do jaw stretches everyday, which absolutely wreck so I can get quite lazy with it, if I'm being honest. I really hope it doesn't become an ongoing issue for me, as I'm afraid of going through another surgery or further pain in the future.
My surgical hooks are hopefully going to be removed soon; they're quite an annoyance and make it difficult to sit your face in a neutral position. I wear two wires at the back on each side of my mouth now, and take them out to eat and to stretch the jaws. They're lighter than my first set of bands, and aren't an issue in the grand scale of things.
I feel like life has just begun for me, as cliché it sounds! I never realised how much of a difference the surgery would make; it's like a black cloud has moved away from me. Absolutely everything is different about me, not only my physical appearance but also my personality and confidence. I've been socialising more than ever, I've become more daring with outfits and I'm saying "Yes!" to opportunities that I would have turned down in the past because of my lack of confidence. I'm not going to say I'm "comfortable in my own skin" or anything along those lines, because I'm not. I have a better view of myself, but unfortunately have started to shift my focus on other flaws. I'm trying really hard to think positively however, and to accept myself and what I look like. It's difficult; this surgery definitely improved my body image views, no doubt, but there's a lot I still have to work on.

I technically still have another month to go until I'm 100% recovered; as I've mentioned before, the jaw bones take on average 3 months to heal. I'll hopefully be getting my braces off this Summer, which I'm dying for! I've had them since I was 11, so it's fair to say I'm sick of the sight of them.
Overall, I'm really happy. I'd recommend the surgery to anyone going through similar issues. It's scary, it's tough, but boy do you feel like a tough cookie afterwards! I highly doubt (and hope) I'll never have to go through anything similar like the surgery or experience again, it's nice knowing that it's all behind me.

I was featured on the front cover of the Irish Independent's 'Health & Living' supplement today, discussing my experience with my underbite and the surgery. My scanner isn't working at the moment unfortunately, so I'll have to post the article up in the future for people overseas to read. I've received a fantastic response from it though, particularly from people with jaw deformations themselves. I'm delighted! 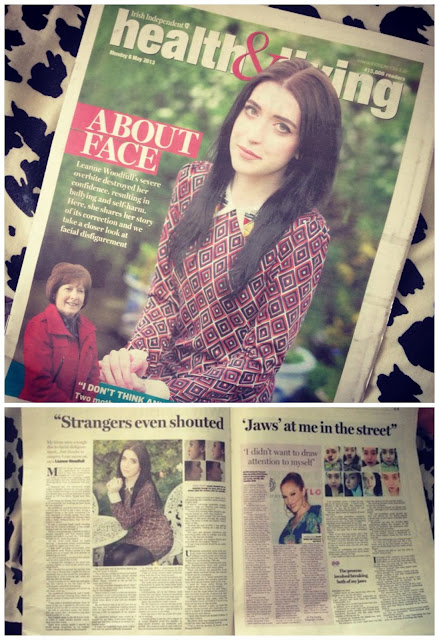