So today has been a sad day. It is my hero, Joe Strummer's 8th anniversary for a start, I thought I'd be more upset than I am - but I'm in contact with Clash fans from all around the world, and we've cheered eachother up tremendously by celebrating his life. Joe Strummer is my absolute God and idol, as most of you know. If I was to ask each of you a favour - it would be to take a minute of your to just read up on Joe, research him. I want everyone to know how special he was.
Unfortunately, this isn't a Joe appreciation post. This a post about betrayal and lies.
Paramore was a band I got into at the tender age of 12. I was awkward, shy and uncomfortable with myself. I was nowhere near finding out who I truely was and I was at the start of growing up. I started listening to this new band Paramore, after hearing their song 'Pressure' in Simoleon language, on my Sims Game. A friend and I were talking about the Sims and it eventually came up that the music featured on the game, is actually real - and then she told me about Paramore. A new band from America, a rock band and their lead singer was a girl - quite unusual for me, seeing as most of the rock bands or bands in general, that I listened to, were fronted by a male.
Over the years I developed an honest and huge love for this band,  religiously bought every CD they released, every single piece of merch available in Ireland at the time (which was little, Asha had about 2 tops) and I met my closest friend through Paramore. For example, on Bebo I used to have a group called 'Irish Image' that I had set up in 2007, it became popular over the years and I remember in the early days of the group, talking to two Paramore fans. Chris and Danielle. 2 people who I still hang out with to this day, and we got talking because of our mutual love for Paramore. This was the case for many friendships across the world I'm sure, and music in general brings people together. The bond Paramore fans had for eachother, seemed unbreakable. 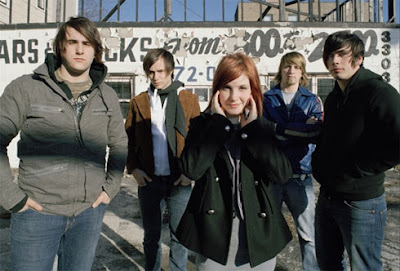 In 2008, Paramore announced they were going to be playing their first Irish show. I remember in April, I queued with my two friend Sorcha and Michelle, at 4.30am at the Jervis centre to queue up for Paramore tickets. Being told the Ticketmaster office would open at 9am, we waited impatiently. 9am came, nothing opened. We were then told it would open at 10am, bullshit. We rang friends who were queuing over at Stephen's Green and who had got their tickets. We ran from the Northside over to the South, in a record of 5 minute. I have never ran so fast in my life, to think I wouldn't get a Paramore ticket would break my heart. We got the tickets anyway, and the 2nd of June finally arrived. 2 days before my Junior Cert, but I didn't give a fuck. I queued for over 10 hours and got sunburnt to shit, fried to an absolute crisp - but I didn't care. I can not even put into words the emotion I felt at that gig, to see 5 (Taylor played as well) of my idols on stage, and listen to them sing the songs I held so true to my heart - it was magical.
That was my first Paramore gig, I saw them again in December 2009 (queued in minus weather for over 14 hours), I saw them supporting Green Day in June 2010 and then I finally saw them, last month.
The last gig I'd go to with 5 of them, the last gig where 'Paramore is a band' meant something and the gig where I would finally get to meet them. I'm sure most of yous watched my video explaining my experience. Putting a long story short, I had a breakdown in front of all them at the signing table, cried my heart out and Taylor told me to be happy - and I was. I was in shock. They say it's a curse to meet your heroes, but I was on such a high. I've never enjoyed a gig so much. 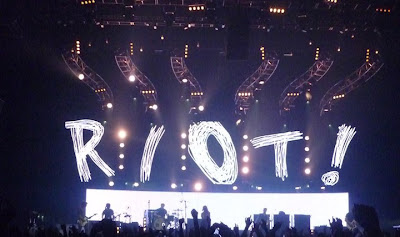 If you're a Paramore fan, which I know a good chunk of you are - you'd know the way Josh always looked quite distant, moody somehow. We thought 'ah that's just the way he is, he's always like that!', but then when the rumours flew around last year of the reasons why Paramore nearly broke up, we became worried. The rumours are that supposedly Hayley cheated on Josh when they were dating, during warped tour with the new Found Glory member, Chad Gilbert. Paramore nearly broke up, cancelled their European tour and took a break. Us fans were relieved when they assured us they were still a band, and that this break would ensure that they made sure they stuck together. Looking back now, I wish they had of broken up then. Brand New Eyes is all a big lie to me now.
Last week, us fans were told of Josh and Zac's sudden departure of the band. We were devastated. Personally, I saw it coming for Josh at some stage - but Zac too?! Two founding members of the band, just suddenly leaving? Fans were split in two - fans who were shocked and realised Paramore were no longer a band, and the fans that were convinced Paramore could somehow stay a band without a needed drummer and guitarist, two original members and of course, a songwriter? I, of course, knew it was the end of Paramore. I don't see how I could stay loyal to a band, with two founding members, brothers, gone. We were informed of Zac's new project, a new band called Tunnels. Again, fans had split opinions - but I was happy to see that he was continuing with music.
When an announcement was made on Paramore's website, us fans were left even more confused. No questions were really answered and to be honest, it made the whole situation even more dodgy sounding to us. Hayley then proceeded to publish her own post, and stated Paramore had kicked Josh out, due to him writing other songs for other people. I find that hilarious, Hayley can fuck off and do her own songs with B.o.B, but heaven forbid any other member wants to expand! Her story, then says Zac subsequently left after his brother was kicked out, blabla, bullshit.
Earlier today a blog post was published, under a new blog set up by Josh Farro, saying his side of the story. It completely contradicted what the Paramore website had informed us of and what Hayley had said.
'' I wish it didn’t have to happen that way, Zac and I wanted to be the ones you heard it from.  I want to be honest with you guys about how this band formulated from day one. I did not think Hayley’s version told the whole story, at least from our perspective and hopefully this will explain a bit about why we are leaving.''
So already, one paragraph into Josh's post, we find out Hayley had jumped at the chance to get the first word in and also Josh and Zac had left - not been kicked out. You can read Josh's post here. It basically informs us that Paramore was a lie. Paramore was never a band it was Hayley's band. I'll let yous read the post for yourself, but it has left me feeling heartbroken, betrayed and confused. Paramore have taken up 5 years of my life, I have practically kissed the ground they walked on - and now we're being told it's all a sham.
Of course people said Josh's post was a fake, Kerrang! website even issued a statement from Paramore's reps to say it was fake - keep in mind it was Paramore's rep, not Josh or Zac. And it was actually deleted off the site after a while of it being up. Also, to back up that the blog is real, Josh's wife posted a blog linking to it here. I believe the blog post, and of course I may be wrong. It all just adds up, and makes sense to me. Each member is currently keeping quiet, nobody is tweeting or blogging and ''Paramore'' are dragging it out too long. Nobody will let us fans know what the fuck is going, all we're seeing is an immature media battle over the internet, where we can all see.
It's a joke, everything about Paramore is a joke. I adore the music, but it now has no meaning to me? I feel I've wasted 5 years of my life, idolizing a band as a whole, but it was all a lie. I still appreciate and love Zac, Josh, Jeremy and Taylor - but as for Hayley Williams, my opinions have completely changed. We all knew how stuck up her hole she was, but now it's just gone too far. To think I looked up to her in the past, to think that I saw her as a role model... I feel so stupid.
Currently, we're all desperately waiting to hear something official, mature and confirmed. We're all drained from all this bullshit, and sick of it. We want facts and we want them now. Time is precious, and yous are losing fans by the second. Grow the fuck up, and tell us what the story is!
Update: Josh's wife has wrote another blog post confirming that Josh's post was real! Read it here.
Josh also put up a video of himself confirming the blog pst was real, but Youtube have deleted it unfortunately.
Labels: paramore